RESTAURANT RIGHI, a Michelin star restaurant in the heart of a UNESCO World Heritage Site

The chef’s unmistakable signature leaves the kitchen to characterise the interiors of the premises. 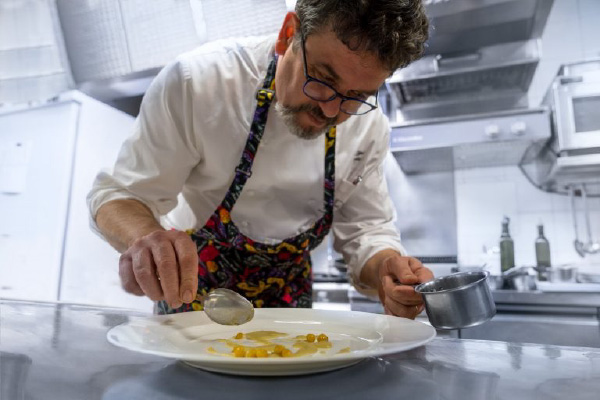 A HISTORY OF SUCCESS

It follows the story of the most beautiful and famous square in San Marino: Pianello. The building, which has played host to the restaurant for three generations, was once a post house, then a tavern, and an inn, until it was given its current intended use 50 years ago by Mrs. Maria Righi. She was the first member of the family to take the helm of the kitchen in this symbolic San Marino restaurant. She was followed by chef Luigi Sartini in 1990. The food evolved and developed, while always retaining a strong link with the local territory, its extraordinary raw materials and its traditional welcoming hospitality. The growth process continued and the Michelin Guide star was awarded thanks to Luigi Sartini after 10 years. A new chapter in the story of this symbolic San Marino restaurant began in February 2016. It is Luigi Sartini, along with his wife Francesca and their daughter Melania, who run and manage all of Righi’s activities.  No longer just management of the kitchen and catering, but also on a new concept for both the premises and the food, with Osteria La Taverna on the ground floor and the Gourmet Restaurant on the first floor, without neglecting the Catering business in any way

Close
Start typing to see posts you are looking for.